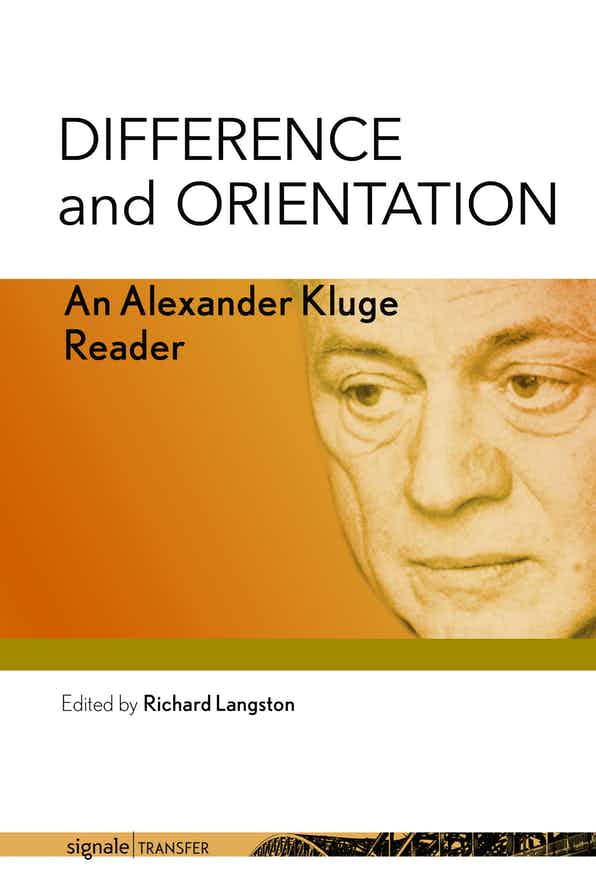 Alexander Kluge is one of contemporary Germany's leading intellectuals and artists. A key architect of the New German Cinema and a pioneer of auteur television programming, he has also cowritten three acclaimed volumes of critical theory, published countless essays and numerous works of fiction, and continues to make films even as he expands his video production to the internet. Despite Kluge's five decades of work in philosophy, literature, television, and media politics, his reputation outside of the German-speaking world still largely rests on his films of the 1960s, 70s, and 80s.

With the aim of introducing Kluge's heterogeneous mind to an Anglophone readership, Difference and Orientation assembles thirty of his essays, speeches, glossaries, and interviews, revolving around the capacity for differentiation and the need for orientation toward ways out of catastrophic modernity. This landmark volume brings together some of Kluge's most fundamental statements on literature, film, pre- and post-cinematic media, and social theory, nearly all for the first time in English translation. Together, these works highlight Kluge's career-spanning commitment to unorthodox, essayistic thinking.

Richard Langston is Professor of German Literature at the University of North Carolina at Chapel Hill. He is the author of Visions of Violence and translator of History and Obstinacy by Alexander Kluge and Oskar Negt (edited by Devin Fore).