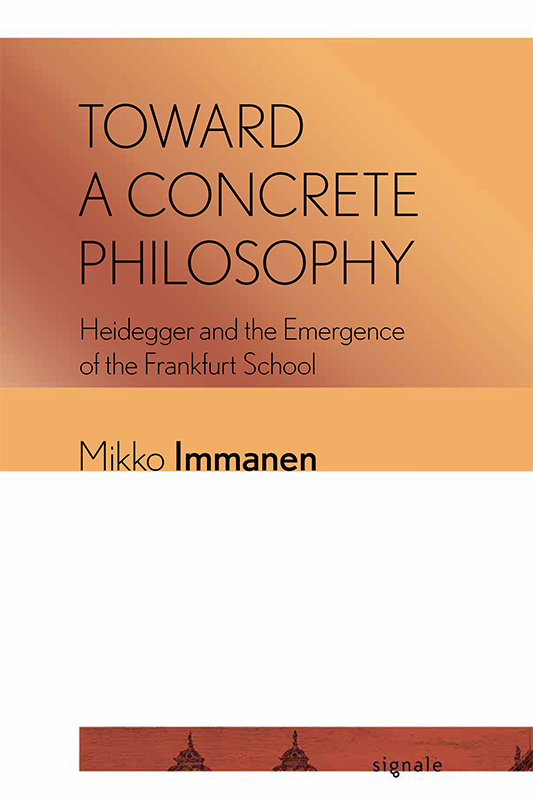 Toward a Concrete Philosophy explores the reactions of Theodor Adorno, Max Horkheimer, and Herbert Marcuse to Martin Heidegger prior to their dismissal of him once he turned to the Nazi party in 1933. Mikko Immanen provides a fascinating glimpse of the three future giants of twentieth-century social criticism when they were still looking for their philosophical voices. By reconstructing their overlooked debates with Heidegger and Heideggerians, Immanen argues that Adorno, Horkheimer, and Marcuse saw Heidegger's 1927 magnum opus, Being and Time, as a serious effort to make philosophy relevant for life again and as the most provocative challenge to their nascent materialist diagnoses of the discontents of European modernity.

Our knowledge of Adorno's "Frankfurt discussion" with "Frankfurt Heideggerians" remains anecdotal, even though it led to a proto-version of Dialectic of Enlightenment's idea of the entwinement of myth and reason. Similarly, Horkheimer's enthusiasm over Heidegger's legendary post–World War I lectures and criticism of Being and Time have escaped attention almost entirely. And Marcuse's intriguing debate with Heidegger over Hegel and the origin of the problematic of "being and time" has remained uncharted until now. Reading these debates as fruitful intellectual encounters rather than hostile confrontations, Toward a Concrete Philosophy offers scholars of critical theory a new, thought-provoking perspective on the emergence of the Frankfurt School as a rejoinder to Heidegger's philosophical revolution.

Mikko Immanen is Academy of Finland postdoctoral researcher in the Department of Social Sciences and Philosophy at the University Jyväskylä.