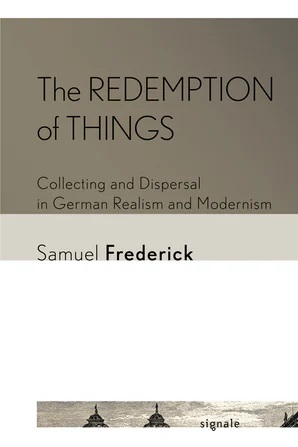 Collecting is usually understood as an activity that bestows permanence, unity, and meaning on otherwise scattered and ephemeral objects. In The Redemption of Things, Samuel Frederick emphasizes that to collect things, however, always entails displacing, immobilizing, and potentially disfiguring them, too. He argues that the dispersal of objects, seemingly antithetical to the collector's task, is actually essential to the logic of gathering and preservation.

Through analyses of collecting as a dialectical process of preservation and loss, The Redemption of Things illustrates this paradox by focusing on objects that challenge notions of collectability: ephemera, detritus, and trivialities such as moss, junk, paper scraps, dust, scent, and the transitory moment. In meticulous close readings of works by Gotthelf, Stifter, Keller, Rilke, Glauser, and Frisch, as well as an experimental film by Oskar Fischinger, Frederick reveals how the difficulties posed by these fleeting, fragile, and forsaken objects help to reconceptualize collecting as a poetic activity that makes the world of scattered things uniquely palpable and knowable.

Samuel Frederick is Associate Professor of German at the Pennsylvania State University. He is the author of Narratives Unsettled and the coeditor of Robert Walser and Information, a volume of keywords.