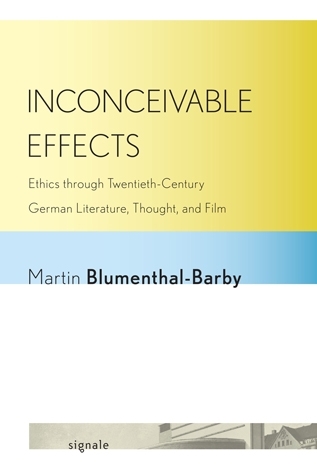 In Inconceivable Effects, Martin Blumenthal-Barby reads theoretical, literary and cinematic works that appear noteworthy for the ethical questions they raise. Via critical analysis of writers and filmmakers whose projects have changed our ways of viewing the modern world—including Hannah Arendt, Franz Kafka, Walter Benjamin, the directors of Germany in Autumn, and Heiner Mueller—these essays furnish a cultural base for contemporary discussions of totalitarian domination, lying and politics, the relation between law and body, the relation between law and justice, the question of violence, and our ways of conceptualizing "the human."

A consideration of ethics is central to the book, but ethics in a general, philosophical sense is not the primary subject here; instead, Blumenthal-Barby suggests that whatever understanding of the ethical one has is always contingent upon a particular mode of presentation (Darstellung), on particular aesthetic qualities and features of media. Whatever there is to be said about ethics, it is always bound to certain forms of saying, certain ways of telling, certain modes of narration. That modes of presentation differ across genres and media goes without saying; that such differences are intimately linked with the question of the ethical emerges with heightened urgency in this book.

Martin Blumenthal-Barby is Assistant Professor of German and Film Studies at Rice University.