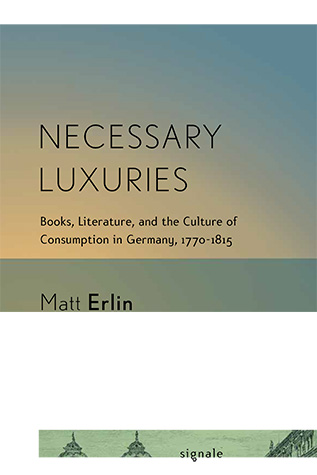 The consumer revolution of the eighteenth century brought new and exotic commodities to Europe from abroad—coffee, tea, spices, and new textiles to name a few. Yet one of the most widely distributed luxury commodities in the period was not new at all, and was produced locally: the book. In Necessary Luxuries, Matt Erlin considers books and the culture around books during this period, focusing specifically on Germany where literature, and the fine arts in general, were the subject of soul-searching debates over the legitimacy of luxury in the modern world.

Building on recent work done in the fields of consumption studies as well as the New Economic Criticism, Erlin combines intellectual-historical chapters (on luxury as a concept, luxury editions, and concerns about addictive reading) with contextualized close readings of novels by Campe, Wieland, Moritz, Novalis, and Goethe. As he demonstrates, artists in this period were deeply concerned with their status as luxury producers. The rhetorical strategies they developed to justify their activities evolved in dialogue with more general discussions regarding new forms of discretionary consumption. By emphasizing the fragile legitimacy of the fine arts in the period, Necessary Luxuries offers a fresh perspective on the broader trajectory of German literature in the late eighteenth and early nineteenth century, recasting the entire period in terms of a dynamic unity, rather than simply as a series of literary trends and countertrends.

Matt Erlin is Professor and Chair, Department of Germanic Languages and Literatures, at Washington University in St. Louis. He is the author of Berlin’s Forgotten Future and coeditor of Distant Readings and German Culture in Nineteenth-Century America.