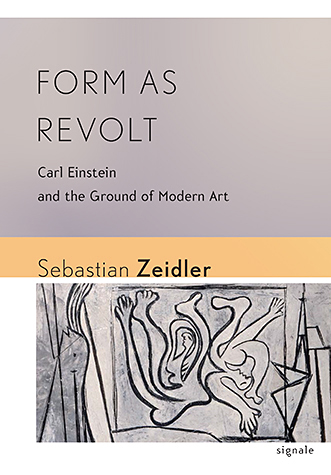 The German writer and art critic Carl Einstein (1885–1940) has long been acknowledged as an important figure in the history of modern art, and yet he is often sidelined as an enigma. In Form as Revolt Sebastian Zeidler recovers Einstein's multifaceted career, offering the first comprehensive intellectual biography of Einstein in English.

Einstein first emerged as a writer of experimental prose through his involvement with the anarchist journal Die Aktion. After a few limited forays into art criticism, he burst onto the art scene in 1915 with his book Negro Sculpture, at once a formalist intervention into the contemporary theory and practice of European sculpture and a manifesto for the sophistication of African art. Einstein would go on to publish seminal texts on the cubist paintings of Georges Braque and Pablo Picasso. His contributions to the surrealist magazine Documents (which Einstein cofounded with Georges Bataille), including writings on Picasso and Paul Klee, remain unsurpassed in their depth and complexity.

In a series of close visual analyses—illustrated with major works by Braque, Picasso, and Klee—Zeidler retrieves the theoretical resources that Einstein brought to bear on their art. Form as Revolt shows us that to rediscover Einstein's art criticism is to see the work of great modernist artists anew through the eyes of one of the most gifted left-wing formalists of the twentieth century.

Sebastian Zeidler is Associate Professor of the History of Art at Yale University.