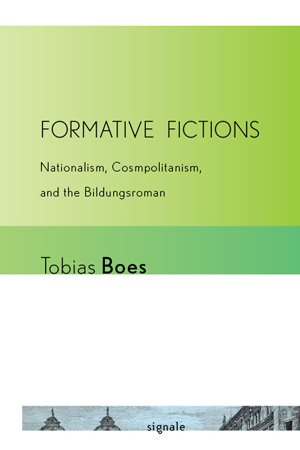 The Bildungsroman, or “novel of formation,” has long led a paradoxical life within literary studies, having been construed both as a peculiarly German genre, a marker of that country's cultural difference from Western Europe, and as a universal expression of modernity. In Formative Fictions, Tobias Boes argues that the dual status of the Bildungsroman renders this novelistic form an elegant way to negotiate the diverging critical discourses surrounding national and world literature.

Since the late eighteenth century, authors have employed the story of a protagonist's journey into maturity as a powerful tool with which to facilitate the creation of national communities among their readers. Such attempts always stumble over what Boes calls “cosmopolitan remainders,” identity claims that resist nationalism’s aim for closure in the normative regime of the nation-state. These cosmopolitan remainders are responsible for the curiously hesitant endings of so many novels of formation.

In Formative Fictions, Boes presents readings of a number of novels—Goethe’s Wilhelm Meister’s Apprenticeship, Karl Leberecht Immermann’s The Epigones, Gustav Freytag’sDebit and Credit, Alfred Döblin’s Berlin Alexanderplatz, and Thomas Mann’s Doctor Faustusamong them—that have always been felt to be particularly “German” and compares them with novels by such authors as George Eliot and James Joyce to show that what seem to be markers of national particularity can productively be read as topics of world literature.

Tobias Boes is Assistant Professor of German at the University of Notre Dame.